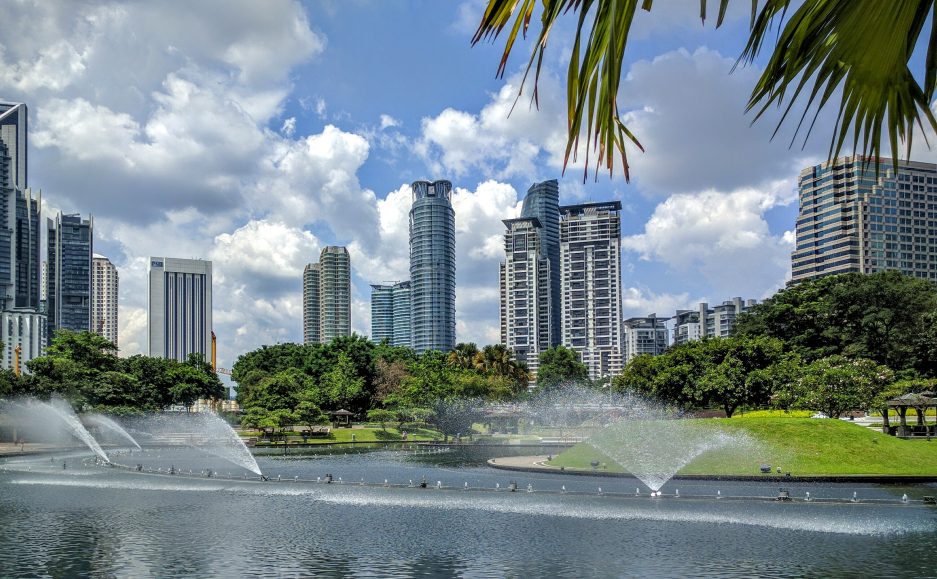 Before I can even begin to tell you about my first impressions of Kuala Lumpur, I have to share with you more about the time leading up to the day we would leave and that ‘short’ 24 hour travel day.

I was beyond overwhelmed. I had left my career that I had with the same company for 16 years, which was very difficult to do.  Ariane was going to be leaving her daycare.  It is the same daycare that made me cry the day I dropped her off and the same daycare that made me cry the day I picked her up for the last time. Our house was officially sold.  We loved this house.  We built this house.  Our things were quickly packed up and either sold/given to other people, sent to a Georgia storage facility or put on a container that would eventually make its way to Kuala Lumpur.  When I mentioned being overwhelmed, I had LITERALLY gone through our entire house and put colored sticky notes on everything.  Pink was ‘move to KL’, Orange was ‘store in GA’ and Yellow was ‘Sold’.  I even had my closet filled with clothes/shoes/handbags to ‘store in GA’ and clothes/shoes/handbags to ‘move to KL’ and another closet that was the ‘don’t touch’ closet.  It was all of the stuff that we would be taking to Wisconsin with us before heading to the other side of the world. Pretty organized hey?!  It was exhausting.  My husband told me I brought that exhaustion on myself. I am pretty sure he thought I was crazy!  BUT when the movers were there, I can also tell you that my husband was thankful for all that I had done, because it made things go extremely smoothly.  So smoothly, that within 2 short days, our home was not our home anymore.  It was empty.  I cried a few times, but tried to stay focused on our adventure ahead. 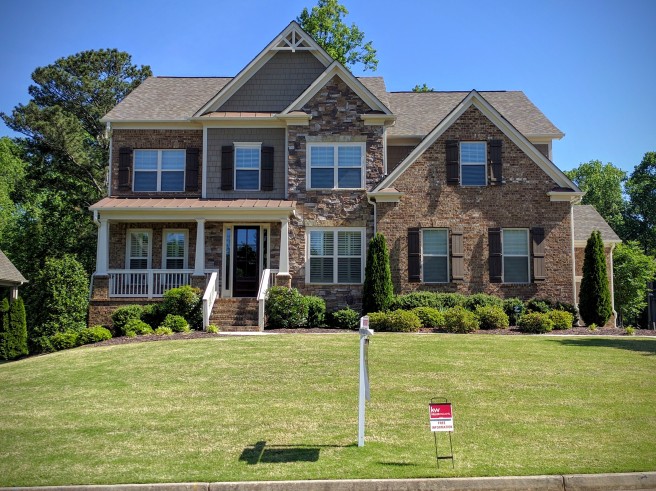 It is not a joke when I say that I was able to show excitement and nerves when asked about our move to Kuala Lumpur, but on the inside I was a complete mess.  I felt anxious, I was scatterbrained, I was excited, but couldn’t even understand the reality of where we were moving because in my head there were too many things to do before we would get there. My wonderful husband would repeatedly assure me that everything would be fine, but he would also delicately mention Xanax and Prozac and that perhaps those anxiety medications might help calm me down.  I think he was serious.  Did I mention my husband is a funny guy?  I had so many questions, but one question that I didn’t have was whether or not this was the right move for us.  I always had an inner calm about our decision to move to Kuala Lumpur.  So I knew that once we got to Kuala Lumpur, all would be okay.

Unfortunately, however, we were not there yet.  So the questions kept racing around whatever brain I felt I had left and as soon as I had one answered, I would think of another one.  Oh my poor husband.  Where will we live before moving there? What do I need to pack? How in the hell are we going to fly 20+ hours with a 20 m0nth old? How in the hell am I going to fly 20+ hours?! How do I even begin to find all new doctors for our daughter?  Do they practice western medicine? Where will Ari go to daycare/school?  What am I going to be doing? What will our place look like? Is KL child friendly? What are the restaurants like? What are the people like?  Where will I get my hair done? What stores do they have? Where will I buy groceries?  Will I have to drive on the opposite side of the car on the opposite side of the road?  Is it really that hot?  Why is the humidity 100% every single day? So food is cheap, but wine is expensive?  Yikes.  That is not good.  And so on, and so on and so on.  Believe me when I say it was worse than that and if you don’t believe me just ask my husband.

After saying goodbye to our family and friends in Georgia.  Sob. 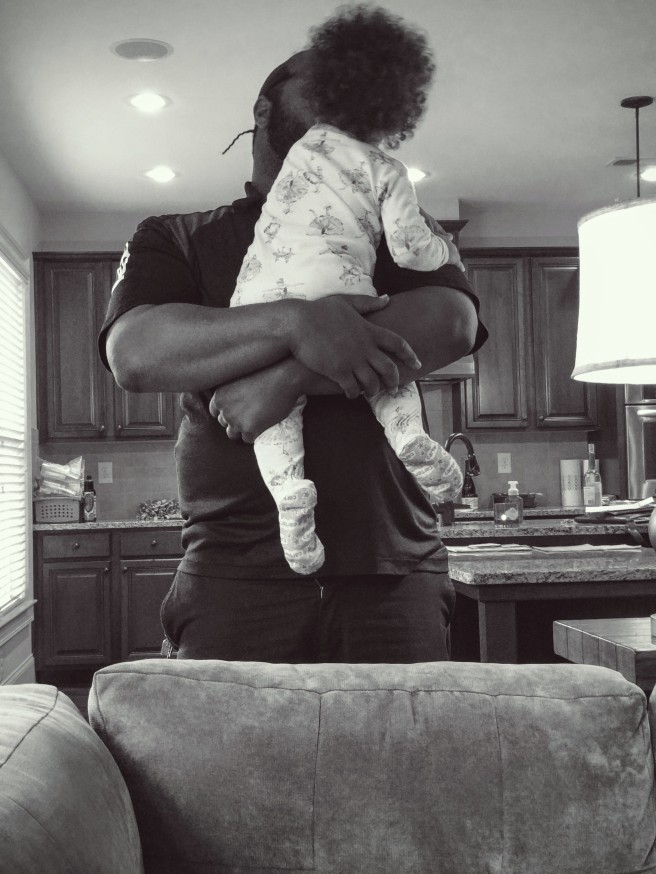 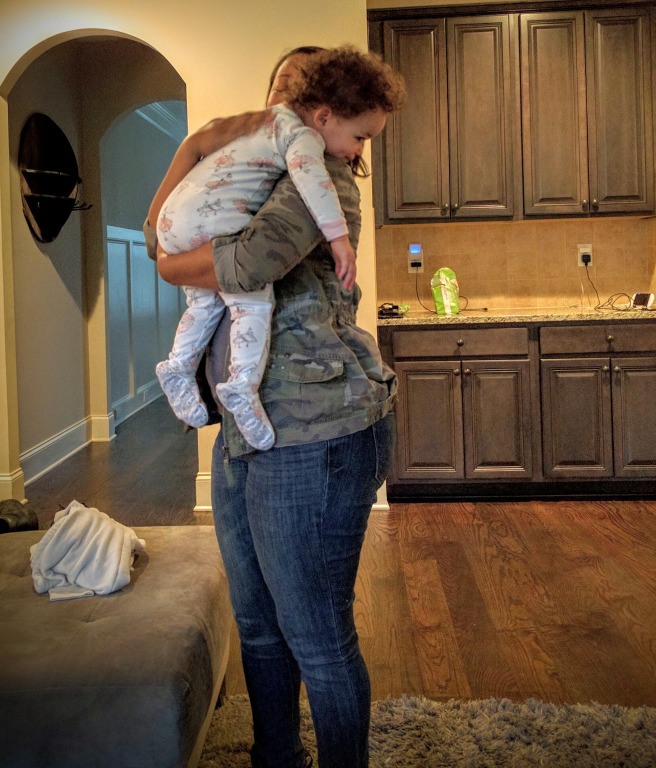 We flew from Atlanta, GA to Milwaukee, WI.  We were able to spend roughly 5 weeks with our families in Wisconsin prior to leaving for Malaysia.  We had such a great time.  It was so good to see Ari with family, playing with cousins, enjoying time outside in warm weather and having the opportunity to just be loved on by the many people that would be missing us all soon.  I really can’t thank our families enough for being so supportive of our decision and making that part ‘easy’, although it wasn’t ‘easy’ when the time came to say our goodbyes. 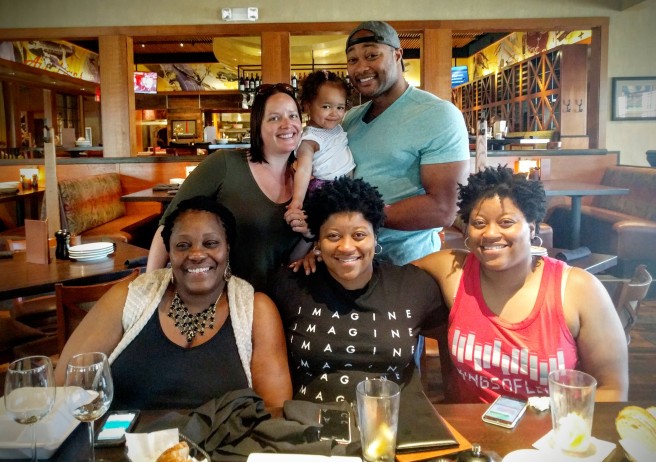 Hello June 1st 2016.  The time had come. We were all packed and everything was organized. We had our checked baggage separated from our carry-on baggage.  I had checked and checked again to make sure that we had EVERYTHING that we would need for that flight.  I mean seriously y’all….20+ hours with a toddler.  We are doomed!  Or will she surprise us?  Our shuttle van to take us from Milwaukee to Chicago had arrived.  Our flight would be leaving that evening around 8:30pm.  Perfect timing.  Ari would be tired and she would sleep at least 10 hours of that 13 hour flight…right?  We would then connect in Dubai, have a short layover, board the next flight and Ari would be ready for a nap.  Maybe she would sleep a couple hours or so on that final 7 hour stretch to Kuala Lumpur?  Wishful thinking?

We arrive at Chicago O’Hare and the line to check-in for Emirates is RIDICULOUS! Fortunately we allowed ourselves plenty of time, so this didn’t stress me out.  My thoughts and continued questions were fluttering around in my head.  So we get all checked in, it went faster than expected, we are headed to our departure gate and I suddenly realize that I am missing something.  It wasn’t my passport, it wasn’t my boarding pass and well thank God it wasn’t our daughter.  I was missing a little black bag that I had meticulously packed that I know I left my parent’s house with that had a couple of prescriptions, infant Tylenol, children’s Benadryl (need I say more!), travel toothbrushes, travel toothpaste, children probiotics, TUMS, travel deodorant, and a few other things.   I was in sheer panic mode!  Aside from the carry-on bags with snacks, wrapped gifts for Ari to open along the way, blankets, pillows, extra clothes and headphones, this bag (in my head at the time) was the most important bag!  Why?  I don’t know.  I guess because probiotics are expensive and it had Benadryl in it!  We called the van company, we called my Mom to double check the house to make sure we had taken it.  It was nowhere to be found. I know most of you are probably thinking, big deal it is all replaceable.  And it is and we did, short of the probiotics, at the airport convenience store, but I was convinced that it was the first of many things that would go wrong on this 24 hour travel day. 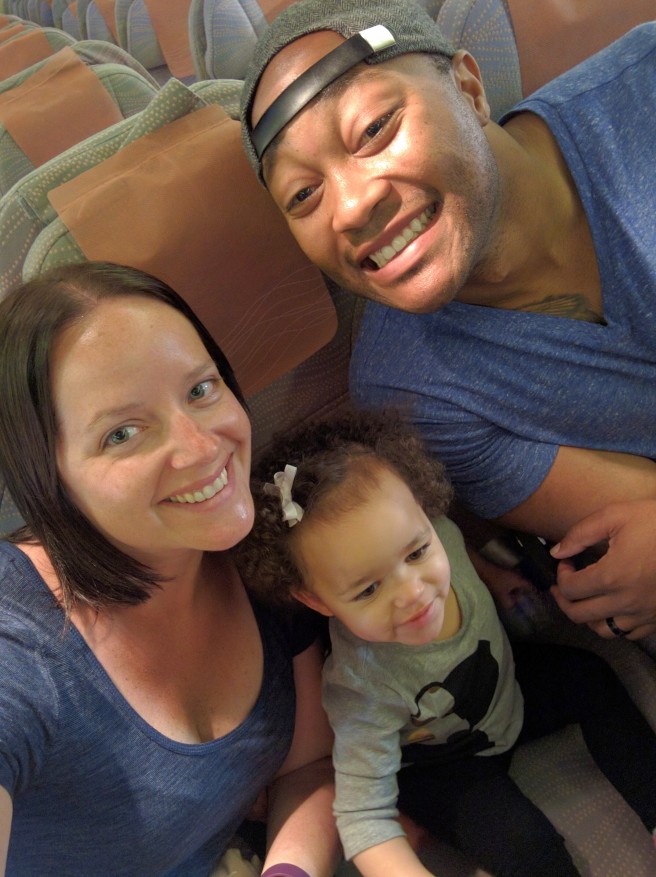 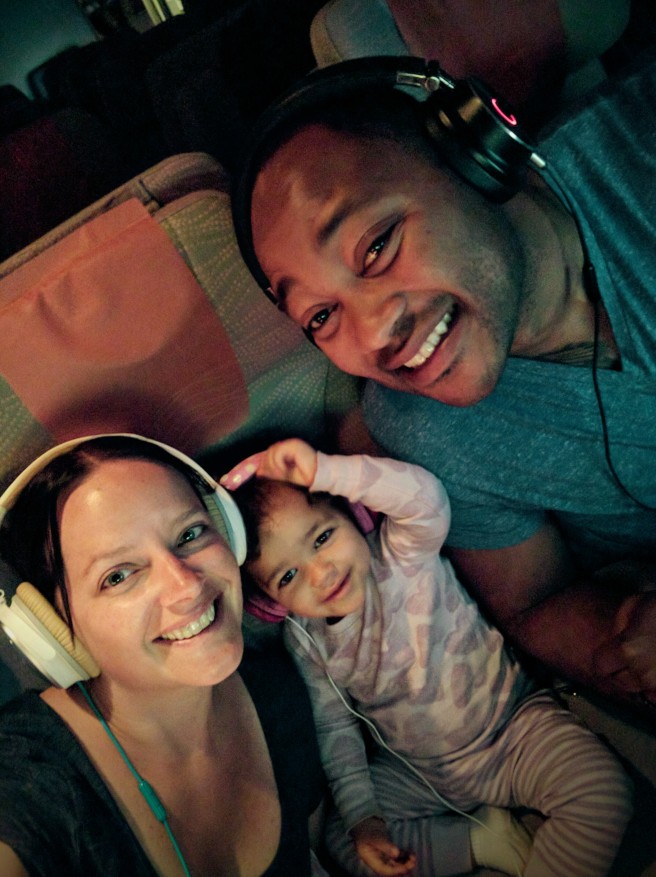 I am happy to report that it pretty much was. The flight was long, like damn long.  Ari went to bed late, was pretty uncomfortable sleeping, but she racked up like 7 hours so not horrible.  Antoine and I didn’t sleep well at all, but did watch some movies, eat not so great airplane food and each hour that passed was an hour closer to our final arrival in Kuala Lumpur.  We had a quick layover in Dubai, so I can officially say I have been to Dubai right? We were quickly on our next flight, which would be the final stretch to our final destination.  Ari took an awesome nap, was fairly pleasant and I kid you not, she only needed to open like 4 out of the 12 presents I wrapped for her!  Over prepared I guess, but I will take that over being under prepared!  We were almost there!  There is literally something strange about being excited when there is only 4 hours to go until you land.  Prior to this flight my longest flight was 5 hours.  I will, however, say that it wasn’t as bad as I thought it would be, Ari was a rock star and our family landed safe and sound in Kuala Lumpur, Malaysia.

So what did I think about Kuala Lumpur?  Day 1?  What was my first impression? 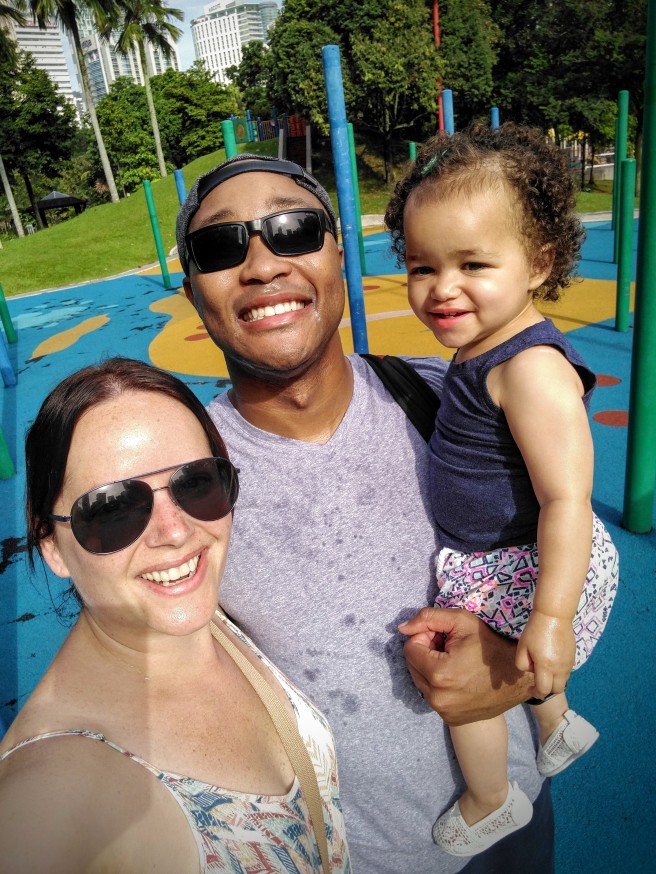 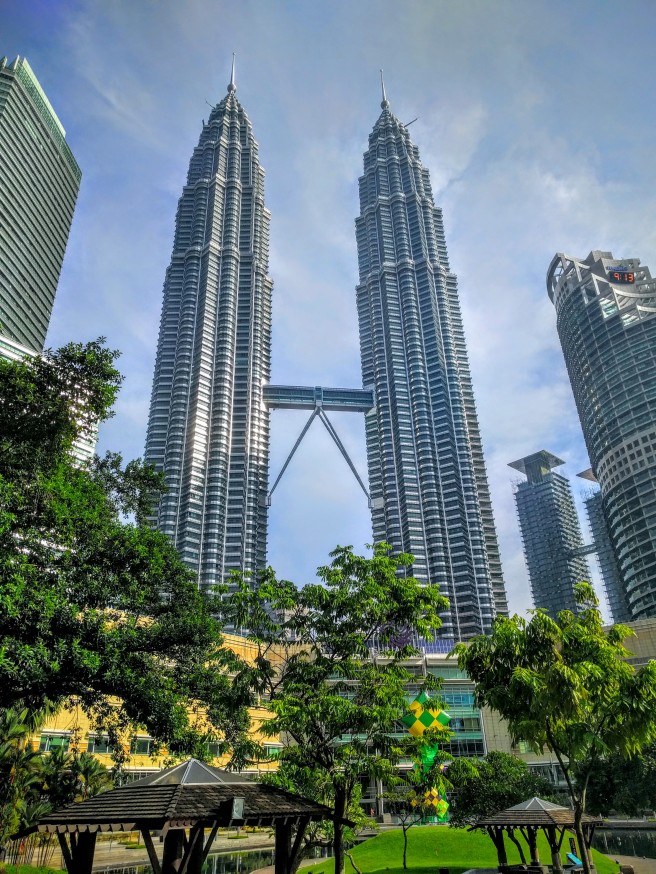